It has been a busy couple of days, but I am getting settled in and have a network connection, so I wanted to write about what has been happening.

After a few delays, our flight left Christchurch on Tuesday, October 24th around noon (only a day after I was originally scheduled to leave, but 4 days late for many people there). 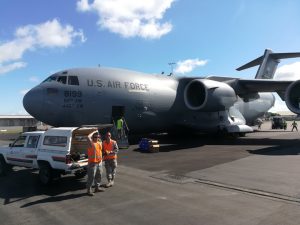 They loaded us all (111 people) into a C-17, which is one of the largest military transport planes. It was a pretty fun flight. There are seats all along the sides of the plane and they added additional seats in the middle. They often put cargo there, but on this flight, they needed to get a lot of people down to the Ice so they crammed as many people in as possible. But, I had more room on this flight than on the commercial flight I took down to New Zealand from the States. The only downside was that the plane was really loud, so wearing earplugs or headphones was important. 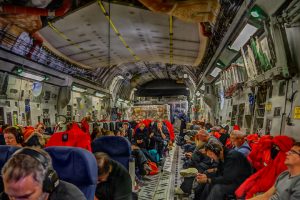 When we boarded the airplane, we are given a sack lunch and a water bottle to last us through the trip, plus some extra food in case we have to “boomerang” and turn around before we make it down there. The flight on the C-17 is only 5 hrs from Christchurch to McMurdo, and happily we made it down there with no other issues.

As we neared the continent, we could see sea ice out the windows. And the pilots let us go up in pairs to look out the cockpit windows. Antarctica from the air was beautiful. 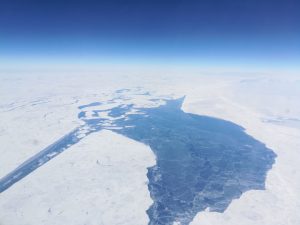 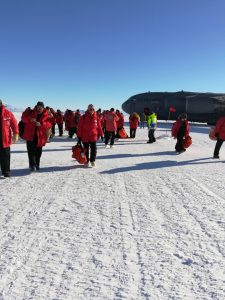 We exited the airplane right onto the ice. We all gathered around and got a few photos before getting on buses and heading to McMurdo where we had more briefings, dinner, got our rooms, and settled in. 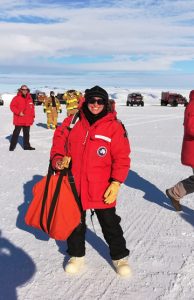