I have been here for 7 days and it has taken me a while to get my bearings and figure out whether I was looking out over sea ice or the ice shelf.  So I thought a bit of geography and history of the area would be good to share with you. 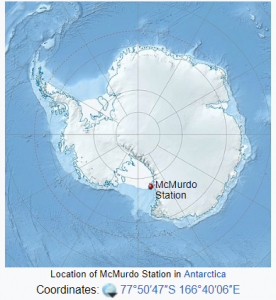 McMurdo Station is located on Hut Point Peninsula on the southernmost end of Ross Island. Sea ice, which can be seasonally open, is on one side of the island, and the ice shelf is on the other. From McMurdo, I look out over the sea ice covered McMurdo Sound. It is the largest base in Antarctica with ~1000 people in summer months and 250 that winter over. New Zealand’s Scott Base (much smaller than Mcmurdo) is also located Ross Island just 1.9 miles away from McMurdo. 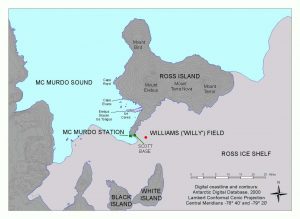 Ross Island is made up of four volcanoes, the two largest are the active Mt. Erebus (12,448 ft ) and dormant Mt Terror ( 10,597 ft). James Clark Ross discovered this region in 1839-1843 and these two landmarks were named after his two ships, the Erebus and the Terror. McMurdo Sound, which is the area to the west of Ross Island and from which McMurdo Station gets its name, is named after Lieutenant Archibald McMurdo of HMS Terror, who first charted this area.

The area where McMurdo Station is located, specifically Hut Point Peninsula, has a rich history in Antarctic exploration and scientific discovery. The hut located here was build in 1902 by Captain Robert Falcon Scott and used as either a main base or staging point by two of Scott’s expeditions, Shackleton’s Nimrod Expedition, and the Ross Sea Party of the Trans-Antarctic Expedition.

There are currently two airfields on the Ice shelf that provide support for McMurdo: Pheonix Airfield, where the large C-17 land, and Williams Airfield (Willy field), where the smaller LC-130s land. Both are located on the Ice shelf east of Ross Island. My work will take me past Scott Base, out onto the ice shelf, and out to Willy field everyday.

Shuttles transport people from the base to the airfields, or we can borrow trucks to transport people and equipment as well. Roads lead from the land areas of McMurdo and Scott base onto the ice shelf. Roads are groomed to make it easy to drive, and roads are marked with flags. The marked routes are checked to make sure there are no crevasses in the ice shelf.  It is important, therefore, to stay in the marked areas since they are known to be safe.

The trip from McMurdo to Willy Field takes about 30 minutes in a shuttle, and the scenery is amazing. Not a bad place to have to commute to everyday!