McMurdo Station is the largest settlement in Antarctica.  It is like a tourist town in that its population swells in summer, but the summertime visitors are scientists, not tourists.  As the research season gets into full swing the population can grow to over 1000, and right now it is 910.  Some scientists are just passing through town on their way to Deep Field Camps.  Some stay longer.  Our group will be here about 5 weeks.

, a medical clinic, a chapel, 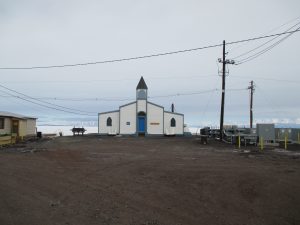 a fitness center, a library, a power plant, a sewage plant, and so on.  There is even an ATM (cash machine), although there isn’t much to spend money on.

The architecture is strictly practical — most buildings have metal siding and shed roofs, although some are “quonset hut” style.  The only building that is architecturally distinctive is the Crary Lab (mostly because it steps down a steep hill), and it’s not going to win any awards for exterior aesthetics. Most buildings are labelled with nothing but a number, which is pretty confusing at first, but it doesn’t take long to become familiar with every building you are likely to ever go into.

The busiest building in town is Building 155.  Perhaps because of its importance, it is painted bright blue, which makes it stand out from the dull earth tones of all other buildings.  Building 155 is the home of most administrative offices and the galley, where everyone eats all of their meals.  The galley serves 4 meals per day — breakfast, lunch, dinner on a normal schedule, plus an additional meal called “midrats” (midnight rations) for people on the night shift.  In fact, at 7 am most people are eating breakfast, but people on the nightshift are eating dinner.  Similarly at dinnertime, the night shift people are eating breakfast.  One is not supposed to eat the breakfast food at dinnertime unless one is on midrats.

By the way, the food is actually pretty decent — I especially like the fresh baked bread. There is a good variety at lunch and dinner and it is possible to assemble a reasonably healthy meal and, at least for now (while there are still frequent flights to and from New Zealand), fresh fruit and vegetables are available.

There is not a lot of snow in town as we head into summer.  Ross Island is a collection of volcanoes, and the ground in town is red-brown volcanic rock.  As long as it remains cold (say below 15 degrees F), the rock stays frozen in place.  When we have warm weather (as we have had lately), the snow melts and the ground becomes a muddy mess.  There is no asphalt or concrete pavement.

Upon arriving in McMurdo Station, we immediately attend our first orientation meeting.  It is the first of many meetings to educate us on how to live in the potentially dangerous yet fragile environment of Antarctica.

We then pick up our baggage and find our rooms.  Everybody shares a room, and two neighboring rooms share a bathroom.  There is some shuffling of roommates and I end up rooming with one of my co-workers on the ROSETTA project.